The sky was changing from deepest indigo blue to velvety black. He flitted around the edge of the piazza, keeping to the inky shadows as much as he could. In his hand he clutched a small piece of parchment. Even his wife didn’t know what he had written on it; she would not have approved of his denouncing their neighbors. But those people had no business flaunting their new-found prosperity, no business living above their station! Their fur-trimmed cloaks, their pearl-studded dresses: spitefully, he hoped all these would be confiscated. Then, just as darkness was closing in, he reached the denunciation box and dropped the slip of parchment in.

The mind-set of feudal Europe was very different from today’s. Monarchs had absolute rights over their subjects even in matters we now consider private, such as choice of clothing, food, shoes, and hair styles. Control over these aspects of life came under the aegis of sumptuary laws.

In Europe, sumptuary laws date back to the ninth century. Most countries in Europe enacted sumptuary laws during the Middle Ages, including England, Scotland, Spain, France, the Germanic states, the Italian city-states, and the Netherlands. 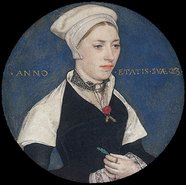 Modest, middle class garb
As a middle class/merchant class began to emerge and control a significant portion of wealth, members of the hereditary aristocracy felt the need to distinguish themselves from these nouveau riches. In addition, increasing urbanization meant that people no longer knew everyone in their community. They needed a quick way to identify people of different classes and “. . . to secure a stable connection between appearance and entitlement.” (Hunt, Alan: Governance of the Consuming Passions: A History of Sumptuary Law; New York, St Martin’s Press 1996)

Genoa passed its first sumptuary law in 1157. England first imposed sumptuary laws in 1363, some form of which remained on the books for nearly 250 years. (Henry VIII alone enacted four separate laws between 1510 and 1533.)

Venice, as a preëminent city with high international visibility, was a model of sumptuary propriety. Between 1299 and 1499 Venice imposed forty-two different pieces of sumptuary legislation.

As sumptuary laws took effect, people scrambled to give the appearance of compliance. In 1515, British law declared that no one less than the king and his family could wear “black fur called genet,” [civet] nor “cloth of gold or tissue [cloth made of twisted strands of metal] or purple color or purple silk.” No longer could a duke outfit his horses’ harnesses with fur and precious metals. No longer could the wife of a wealthy merchant wear fur of “lucernes [lynx] or genets” or “cloth of gold or tissue of gold,” nor even velvet. 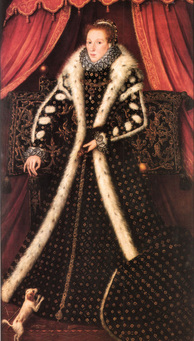 Gems & furs worn by nobility
Some of the reasons for the sumptuary laws were made quite plain, for example in the preamble of Elizabeth I’s laws of 1574 (see Appendix I).  By dictating who could use luxury goods--which were frequently imported, and always costly-- these laws were an attempt to prevent both the outflow of a country’s wealth, and the impoverishment of its nobility. Thus these laws addressed items such as silk, which came from the Far East, and purple dye, a rare commodity obtained from a mollusk found only in one region of the Mediterranean.

The laws were also intended to ensure a humble and pious populace, since it was considered decadent and sinful for common folk to want or own luxuries. And the sumptuary laws attempted to prevent middle class men and women from dressing above their station and being mistaken for and deferred to as nobility. Also, some laws served to prevent peasants from carrying swords.

Yet another impetus behind these laws was protectionism. For example, the English crown had a big stake in the domestic wool industry. Florence and other kingdoms also wanted to protect their own decorative, fiber and metal arts. It boiled down to money: if domestic industries suffered, so did tax collections from them, and therefore, so did monarchs’ treasuries.

Sumptuary law addressed many areas of daily life. Clothing styles, hemlines, colors, trims, belts and shoes - and how much money could be spent on these - were all regulated. Women’s hair was not exempt: for example, in Florence, even at a funeral a woman’s hair was required to be properly coiffed, not disheveled or uncovered. The value of jewelry that could be owned by the different classes was also subject to sumptuary laws. Even the foods permitted to the different social strata were dictated!

Gemstone and pearl decorations on both women’s and men’s clothing were restricted by class, both in the number of gems, and in their value. Nürnberg’s laws specifically forbade men to wear Italian silver daggers in their belts, in an attempt to restrict the importing of such vanity items and encourage people to purchase them locally. 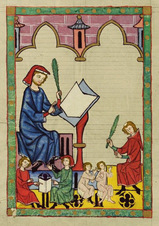 Scribes in proper garments
Occasions such as weddings, baptisms, and other feasts were regulated. The laws specified how many people were allowed to attend, how many gifts were permitted, what attire was appropriate, what time of day they could be held, how many courses of food could be served, and even what forms of entertainment could be conducted. In the southern parts of Italy, where celebrations were often held outdoors in full view of the street, people were a little more cautious about breaking these parts of the laws.

In some of the Italian city-states, a separate official was appointed to enforce sumptuary law. It was often someone who was not a native of that city, in part because it was easier for him to police people who were not his friends and neighbors. In addition, an outsider was unlikely to be part of any existing local bribery schemes.

Venice, Florence and Perugia even provided special denunciation boxes in which people could secretly leave the names of those they observed breaking the law. Since informers were paid, this resulted in a brisk business in denunciations.

The laws typically specified fines for each infraction, but they were extremely difficult to enforce. As a result, they rarely were. It was next to impossible to regulate the desire to buy and show off fancy things. The main effect of all this legislation was to encourage greater and greater ingenuity on the part of those with the desire to buy and flaunt luxury goods.

In Venice, the decolletage of a dress could be no more than the width of two fingers below the collarbone. Therefore, in dressing rooms all over town, women pulled on chemises that came modestly up to their throats, then put their extremely low cut dresses over them.

Slashed sleeves allowed expensive fabrics to peek out from underneath. (Trying to catch up, the laws then banned slashed sleeves.) Illegal fabrics or furs were used to make linings for garments that outwardly complied with the law. Elaborately embroidered buttonholes came into fashion to take the place of banned, expensive precious metal buttons.

Even as simple a ploy as giving a garment or a pelt a different name from the one specified in the statute served to circumvent the law.

In parliament chambers and king’s council rooms all over Europe, sumptuary laws were reviewed and altered regularly. Over time, the emphasis of these laws changed. While in the twelfth century they were more concerned with men’s attire than women’s, by the fourteenth and fifteenth centuries these laws concerned themselves more with women’s attire and accoutrements. Originally almost as concerned with regulating food and entertaining as with regulating dress, this emphasis gradually lessened as the laws targeted clothing more and more. 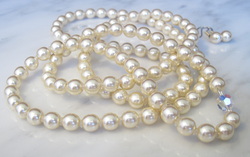 Copyright 2012 Jamie Gordon
So year after year, reign after reign, sumptuary laws were promulgated, largely in vain. As the Renaissance years progressed, a substantial, well-off middle class established itself in Europe, and went right on ignoring these laws. In England, the aristocracy persuaded James VI & I that it was inappropriate for the Crown to dictate to them in the personal matters of their clothing or spending. James acceded, abolishing the sumptuary laws in 1604. Sumptuary laws generally passed out of favor in Europe by the eighteenth century, as fashion became more a part of individual freedoms.

However, bits of sumptuary laws remain even today. They have metamorphosed into new forms whose origins have largely been forgotten. Regulations such as luxury taxes and import restrictions (tariffs) are the distant descendants of sumptuary laws. Market forces still impose a sort of sumptuary hierarchy on the wardrobes of people today: while we may legally be free to wear whatever we like, the substantial outlays required to wear the finest fur, gold, gems or designer shoes still restricts these items to those who can afford them.

Centuries after their repeal, sumptuary law is a piece of the Middle Ages that is with us to this day.
Appendix I

Excerpt from British Sumptuary Law of 1574:

“The excess of apparel and the superfluity of unnecessary foreign wares thereto belonging now of late years is grown by sufferance to such an extremity that the manifest decay of the whole realm generally is like to follow (by bringing into the realm such superfluities of silks, cloths of gold, silver, and other most vain devices of so great cost for the quantity thereof as of necessity the moneys and treasure of the realm is and must be yearly conveyed out of the same to answer the said excess) but also particularly the wasting and undoing of a great number of young gentlemen, otherwise serviceable, and others seeking by show of apparel to be esteemed as gentlemen, who, allured by the vain show of those things, do not only consume themselves, their goods, and lands which their parents left unto them, but also run into such debts and shifts as they cannot live out of danger of laws without attempting unlawful acts, whereby they are not any ways serviceable to their country as otherwise they might be:

“Any cloth of gold, tissue, nor fur of sables: except duchesses, marquises, and countesses in their gowns, kirtles, partlets, and sleeves; cloth of gold, silver, tinseled satin, silk, or cloth mixed or embroidered with gold or silver or pearl, saving silk mixed with gold or silver in linings of cowls, partlets, and sleeves: except all degrees above viscountesses, and viscountesses, baronesses, and other personages of like degrees in their kirtles and sleeves. . . .

“None shall wear any velvet in gowns, furs of leopards, embroidery of silk: except the degrees and persons above mentioned, the wives of barons' sons, or of knights . . .

“Enameled chains, buttons, aglets, and borders: except the degrees before mentioned. . .”