Crest of Scotland
Harness leather creaks in the gray light of the early dawn. The air grows lively with the sound of hooves stomping, mules and horses snorting, men rolling up bedding, blowing on cold-stiffened fingers. Another day on the trade route, one day closer to England and home. And, stowed carefully deep within wagons filled with exotic spices, oils, cotton cloth, and sugar, is the magnificent bounty of the blue seas of the East: glowing, lustrous pearls.

The love of pearls began thousands of years ago. Alexander the Great’s eastern conquests brought pearls from lands as far east as the Persian Gulf and India westward to Europe, where they rapidly became highly sought after. During the Middle Ages, many pearls came from the Red Sea, the Persian Gulf area and the Gulf of Mannar off the coast of India. Britain also had a substantial freshwater pearl industry. Excellent quality freshwater pearls were found in Scotland, created by river-dwelling mussels. The Crown employed river bailiffs to supervise the gathering of these mussels and make sure that all valuable pearls found reached the king's treasury. The Kellie pearl, the largest pearl ever discovered in Britain was found in 1621, and is probably part of the Scottish crown jewels.

The Crusades stimulated trade between western Europe and the Middle East and Eurasia. The crusaders brought back many things that were new to Northern Europe: lemons, apricots, sugar, and cotton. Superbly symmetrical, lustrous pearls from the East were among the most valuable of the rare and exotic objects to travel west. Their value was due in part to the difficulty of harvesting and matching pearls, as well as their natural lustrous finish, glow and brilliance. 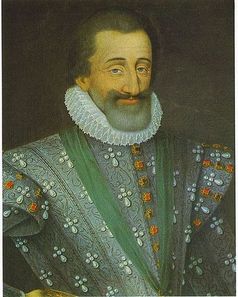 Henri IV of France
During the Middle Ages, Venice became a significant trading center, for pearls no less than other exotic goods. Pearls were traded there in vast quantities. Venice, as the pre-eminent market city in Europe, was an important staging city for the crusaders, and became a vital link in their journey. All sorts of goods from the eastern lands were bought and sold there and made their way into all of Western Europe.

The popularity of pearls in personal decoration in Europe continued to increase during the medieval centuries. By the 13th and 14th centuries pearls were integral to personal adornment throughout Europe, and were worn both by men and women. Pearls were not only used in jewelry but also incorporated into hair ornaments and sewn onto formal dresses and other garments worn on special occasions. Young European maidens of royalty wore long strands of pearls, while men used mother of pearl in their weapons and armor, believing that it would 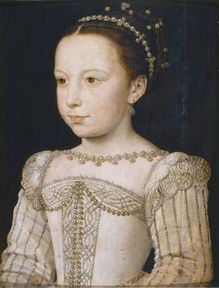 Marguerite of Valois
protect them from harm and bring them luck. Royalty and nobility posed for portraits in their finest clothing studded with pearls, with strands of pearls dripping from their necks. Extravagant displays of pearls became a symbol of wealth and standing. Sumptuary laws were even enacted to limit ownership of such ostentatious finery to people above a certain social station. (In England, for example, those above the rank of Companion of the Garter took full advantage of their exemption from these restrictions.)


Even the church was not exempt from the pearl craze. Clerics used the white, natural pearl to symbolize God’s love in decorating altars, priestly robes and religious objects such as rosaries and crosses. 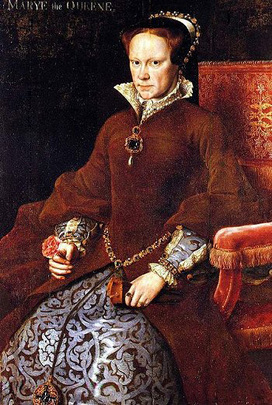 Some pearls became famous in their own right: the famous la Peregrina, a pear-shaped pearl the size of a pigeon egg, was given to Mary Tudor by Phillip II as a wedding gift. It changed hands many times over the centuries and was eventually purchased by Richard Burton in 1969 for Elizabeth Taylor. In 2011, it sold at auction for more than $11 million. 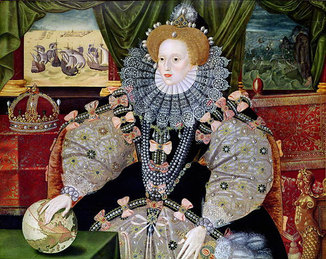 Elizabeth I
Queen Elizabeth I probably brought the love of pearls and their extravagant display to their zenith. The queen not only enjoyed their glowing beauty, but used their symbolism of purity to excellent effect as part of her public image. In George Gower’s “Armada” portrait (painted after England’s defeat of the Spanish Armada), Elizabeth is literally draped in pearls, with pearls embroidered onto her dress and decorating her wig. The magnificent six-strand pearl necklace is part of a collection called the Hanoverian pearls, said to date to the 14th century. Elizabeth bought the entire collection, which included dozens of loose pearls, from the estate of Mary Queen of Scots. It was rumored that Elizabeth owned more than 3,000 pearls.

With their arduous journey finally over, traders lay out their treasures before the covetous eyes of the gem merchants. For some, the profits they realize will enable them to make this their last long, dangerous trip to the East. The pearls will bring the traders fabulous sums. Most are destined for the jewelry collections and splendid robes of queens and kings. Others will dangle enticingly from the ears of high-born ladies in waiting of the court. Whether perfectly round or delicate teardrops, in the Middle Ages, pearls brought beauty and pleasure to all who touched them.